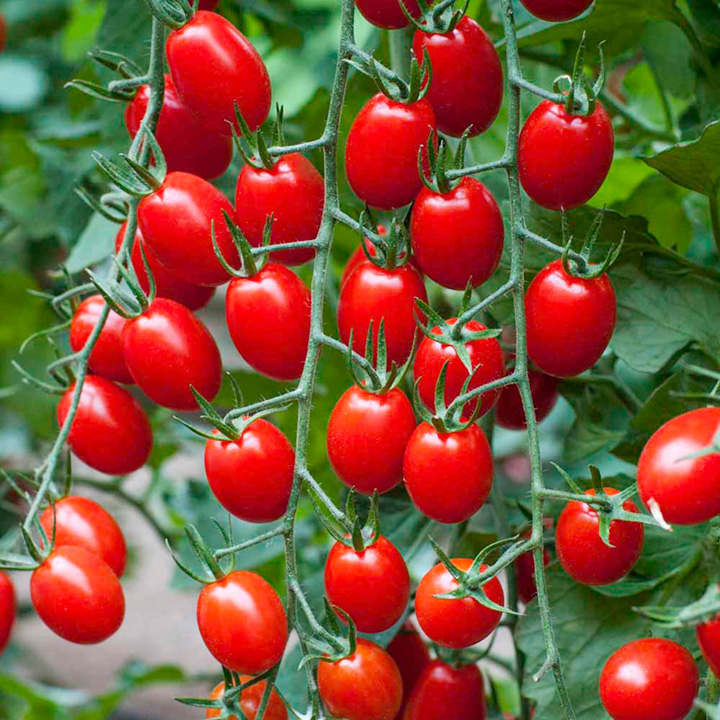 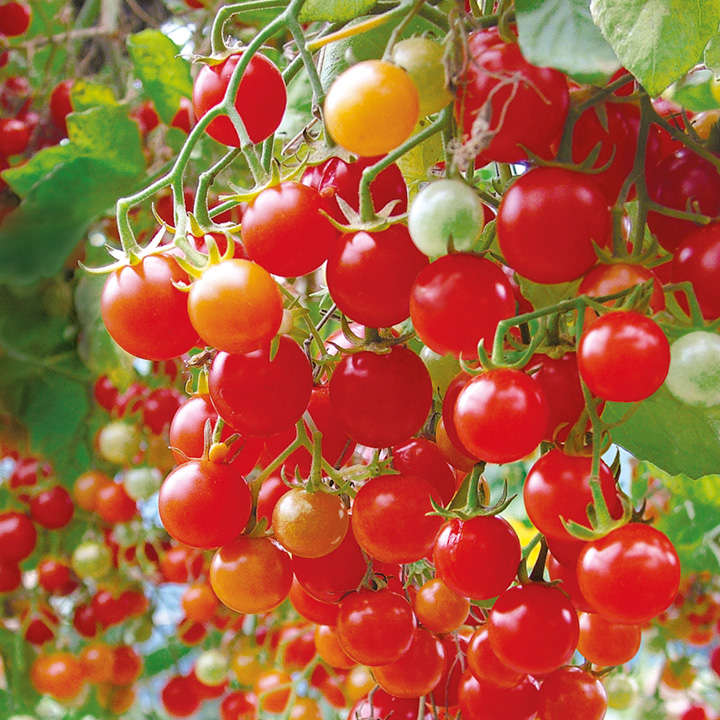 The tomato is the edible, often red berry-type fruit of the nightshade Solanum lycopersicum, commonly known as a tomato plant. The tomato is consumed in diverse ways, including raw, as an ingredient in many dishes, sauces, salads, and drinks.
The tomato belongs to the nightshade family, Solanaceae. The species originated in the South American Andes and its use as a food originated in Mexico, and spread throughout the world following the Spanish colonization of the Americas. Its many varieties are now widely grown, sometimes in greenhouses in cooler climates. The plants typically grow to 1–3 meters (3–10 ft) in height and have a weak stem that often sprawls over the ground and vines over other plants. It is a perennial in its native habitat, although often grown outdoors in temperate climates as an annual. An average common tomato weighs approximately 100 grams (4 oz).
While tomatoes are botanically and scientifically the berry-type fruits of the tomato plant, they can also be considered a culinary vegetable, causing some confusion.

There are around 7,500 tomato varieties grown for various purposes. Heirloom tomatoes are becoming increasingly popular, particularly among home gardeners and organic producers, since they tend to produce more interesting and flavorful crops at the cost of disease resistance and productivity.

Hybrid plants remain common, since they tend to be heavier producers, and sometimes combine unusual characteristics of heirloom tomatoes with the ruggedness of conventional commercial tomatoes.

Tomato varieties are roughly divided into several categories, based mostly on shape and size.


Early tomatoes and cool-summer tomatoes bear fruit even where nights are cool, which usually discourages fruit set. There are also varieties high in beta carotenes and vitamin A, hollow tomatoes and tomatoes that keep for months in storage.
Tomatoes are also commonly classified as determinate or indeterminate. Determinate, or bush, types bear a full crop all at once and top off at a specific height; they are often good choices for container growing. Determinate types are preferred by commercial growers who wish to harvest a whole field at one time, or home growers interested in canning. Indeterminate varieties develop into vines that never top off and continue producing until killed by frost. They are preferred by home growers and local-market farmers who want ripe fruit throughout the season. As an intermediate form, there are plants sometimes known as vigorous determinate or semideterminate; these top off like determinates, but produce a second crop after the initial crop. The majority of heirloom tomatoes are indeterminate, although some determinate heirlooms exist.

Most modern tomato cultivars are smooth surfaced, but some older tomato cultivars and most modern beefsteaks often show pronounced ribbing, a feature that may have been common to virtually all pre-Columbian cultivars. While virtually all commercial tomato varieties are red, some cultivars – especially heirlooms – produce fruit in other colors, including green, yellow, orange, pink, black, brown, ivory, white, and purple. Such fruits are not widely available in grocery stores, nor are their seedlings available in typical nurseries, but they can be bought as seed. Less common variations include fruit with stripes (Green Zebra), fuzzy skin on the fruit (Fuzzy Peach, Red Boar), multiple colors (Hillbilly, Burracker's Favorite, Lucky Cross), etc.

There is also a considerable gap between commercial and home-gardener cultivars. Home cultivars are often bred for flavor to the exclusion of all other qualities, while commercial cultivars are bred for factors like consistent size and shape, disease and pest resistance, suitability for mechanized picking and shipping, and ability to ripen after picking.

Tomatoes grow well with seven hours of sunlight a day. A fertilizer with an NPK ratio of 5-10-10 is often sold as tomato fertilizer or vegetable fertilizer, although manure and compost are also used. 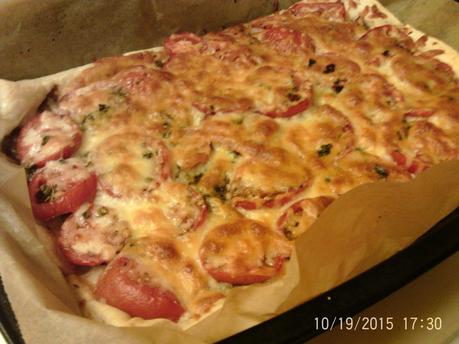 Place the thawed puff pastry sheets on a baking tray. Spread over the kebab meat and tomato slices. Season with herbs (I used oregano and basil). Put on plenty of grated cheese. Bake in oven at 200 C for 20 minutes.
Nice with a cup of tea.

I used quite much tomatoes to this pie but you can use less if you like. Most of the tomatoes have turned red indoors, that´s why I got an idea to make a tomato pie.

And I still have a lot of tomatoes left for weeks or for new pies.

Staff member
I love tomatoes. . even better with cheese!

I had also those tomatoes ^^, but in the pictures they still were green: 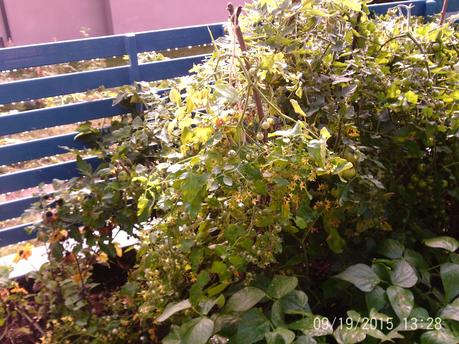 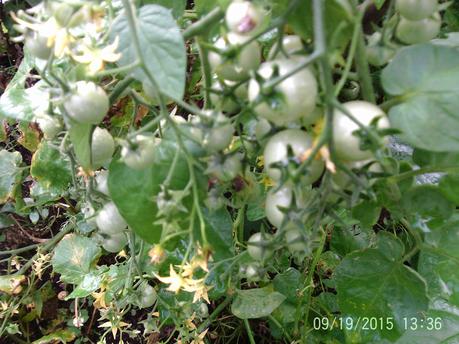 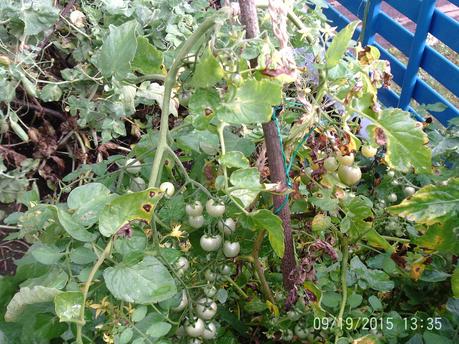 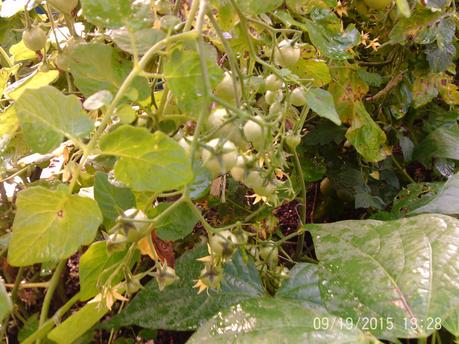 They made tiny tomatoes but they were a lot.
C

I love tomatoes. I make chutney with the green ones that do not ripen to red. it is very nice with cheese. Place the thawed puff pastry sheets on a baking tray. Spread over the kebab meat and tomato slices. Season with herbs (I used oregano and basil). Put on plenty of grated cheese. Bake in oven at 200 C for 20 minutes.
Nice with a cup of tea.

I used quite much tomatoes to this pie but you can use less if you like. Most of the tomatoes have turned red indoors, that´s why I got an idea to make a tomato pie.

And I still have a lot of tomatoes left for weeks or for new pies.