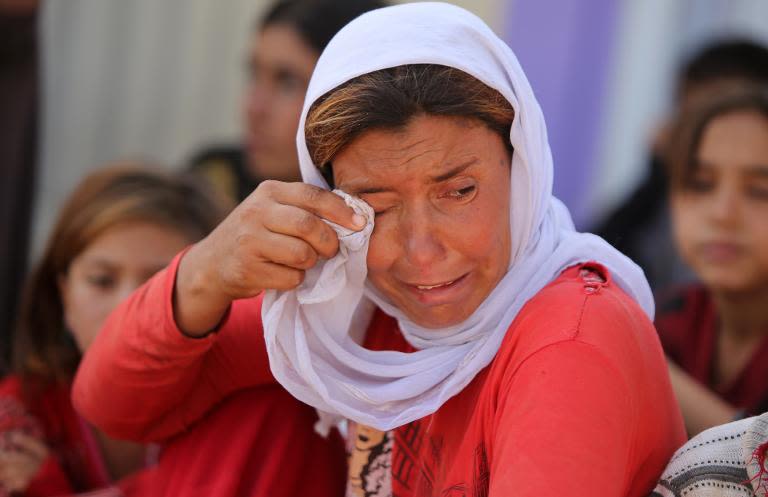 Jihadists kill dozens in north Iraq 'massacre', officials say
​
Jihadists carried out a "massacre" in the northern Iraqi village of Kocho, killing dozens of people, most of them members of the Yazidi religious minority, officials said on Saturday.

Jihadists from the Islamic State (IS) group are carrying out attacks against minorities in Iraq's Nineveh province, prompting tens of thousands of people to flee.

"We have information from multiple sources, in the region and through intelligence, that (on Friday) afternoon, a convoy of (IS) armed men entered this village," senior Iraqi official Hoshyar Zebari told AFP.

"They took their revenge on its inhabitants, who happened to be mostly Yazidis who did not flee their homes," Zebari said, referring to a religious community regarded as heretics by jihadists.

"They committed a massacre against the people," he said. "Around 80 of them have been killed."

Harim Kamal Agha, a senior official of the Patriotic Union of Kurdistan party in Dohuk province, which borders Nineveh, put the death toll at 81 and said the militants had taken women to prisons they control.

And Mohsen Tawwal, a Yazidi fighter, told AFP by telephone that he saw a large number of bodies in the village.

"We made it into a part of Kocho village, where residents were under siege, but we were too late," he said.

"There were corpses everywhere. We only managed to get two people out alive. The rest had all been killed."

Jihadist-led insurgents launched a major offensive in June that began in Nineveh and swept security forces aside, overrunning large areas of five provinces.

In one of the most dramatic chapters of the conflict, the militants stormed the Sinjar area of northwestern Iraq earlier this month prompting tens of thousands of people, many of them Yazidis, to take refugee in the mountains.

Kurdish fighters on the ground and US air strikes eventually helped most of those trapped to escape after more than 10 days under siege, but some remain in the mountains.

They are creating scars that will take a long time to heal. Its really a shame. I have nothing much to say. Pure barbarism. These people know no culture, they have no mercy, and they dont know what Islam really is.

What in the world is their goal to commit all these massacres! People just living their lives, with families and homes killed. Why >_<
Last edited: Aug 17, 2014

MeadowDust said:
What in the world is their goal to commit all these massacres! People just living their lives, with families and homes killed. Why >_<
Click to expand...