When discussing the fall of the Islamic Caliphate, many point a finger towards Mustafa Kemal Ataturk. I blame him as well but it wasn't completely his actions which destroyed the caliphate. It all started with the guy whos picture is on my profile, Sultan and Caliph Abdülmecid. I can't say anything bad about his intentions. He was actually a good Muslim ruler who wanted to fix the Empire, which was in shambles. But in reforms, he was very European minded. Of course he brought about a lot of good things. But unfortunately, he banned the Turban and replaced it with the fez. People were now supposed to wear European style clothing in the government. European style buildings were built. But it wasn't completely European. Rather it was a blend of Turkish and European. Here are examples of this European Turkish blend:

The interior of the Dolmabahce palace. Abdulmecid had this new palace built to replace the older, Topkapi palace. Notice how it is very European like.

Ortakoy mosque. Neo-Baroque style. The calligraphy in the mosque is from the sultan himself. 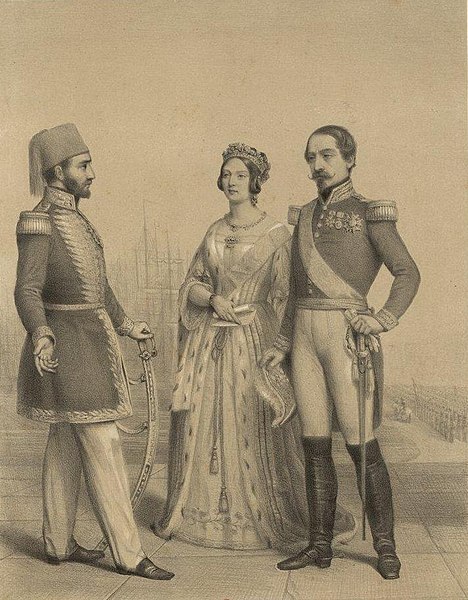 The sultan alongside Queen Victoria of UK and the President of France. Still, Ottoman clothing was unique even though it was heavily influenced by European clothes.

So yeah. The last caliphs themselves destroyed the Caliphate. Maybe not intentionally. I'm not saying they should have all rejected European things, but they should have weeded the good from bad, the beneficial from the harmful. The third Sultan and Caliph after Abdulmecid, Abdulhamid II, kind of realized that some reforms were leading to Ottoman destruction, so he took a very conservative stance to put things back the way they were. He was deposed by radical reformists. I can say he was the last real Caliph of Islam. The last caliph who held the title was Abdulmecid II, who painted pictures of semi-nude women and liked to collect butterflies....

You see, the Europeans somehow entered the veins of Ottoman society. The caliphate became an Imperial European Caliphate. And instead of the Empire being ruled by pious Muslims raised with Islamic teachings, it was taken over by people who were educated in France, in secular schools.
You must log in or register to reply here.
Share:
Facebook Twitter Reddit Pinterest Tumblr WhatsApp Email Share Link
Top