The Quran has about 77,430 words, 18,994 distinct words, 12,183 stems, 1,685 roots, and 3,382 lemmas. It is difficult to create a full glossary of the Quran in a single article. However, we have listed here 15 important terms in Arabic that appear a lot in the Quran and that Muslims might use on a daily basis, without always realizing what it truly means.

Let's dive right in! And as a bonus, learn about the Corpus Quran Dictionary and how it can help improve your understanding of the Book of Allah SWT! 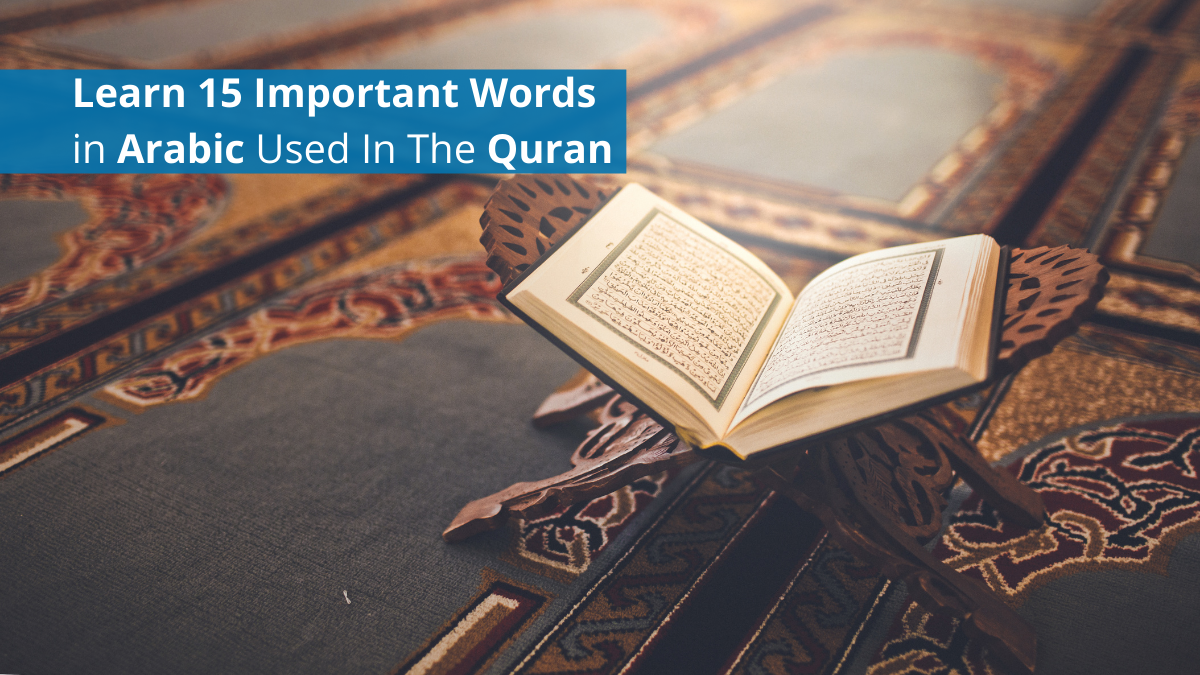 
Usually translated as "religion", the term "deen" actually covers everything from a doctrine (the rituals, laws and norms) to the teachings, practice and even spirituality of that religion: a complete way of life. In the Quran, it also often specifically refers to the True Religion, Islam.


In Islamic theology, "imaan" refers to complete belief in the six pillars of faith of Islam, which are listed in one of the 40 Hadith of Imam An-Nawawi, narrating a beautiful exchange between the Prophet (peace and blessings be upon him) and "a man dressed in extremely white clothes and with very black hair" who was in fact Angel Jibreel (or Gabriel, peace be upon him). In the long hadith, Umar ibn Al-Khattab (may Allah SWT be pleased with him) reports that Jibreel (peace be upon him) asked the Prophet (peace and blessings be upon him):


"Inform me about Imaan (faith)." He (the Prophet) answered, "It is that you believe in Allah and His angels and His Books and His Messengers and in the Last Day, and in fate (qadar), both in its good and in its evil aspects." He said, "You have spoken the truth." (Hadith 2, 40 Hadith An-Nawawi)


Prayer is one of the five pillars of Islam and the most important one after the Shahaadah, the testimony of faith, i.e. declaring and believing that there is no deity worthy of worship except Allah and that Muhammad is the Messenger of Allah. Here is the Shahaadah in Arabic, with transliteration and translation in English:

Zakaah is the third pillar of Islam and an obligation ordained on all Muslims who meet the necessary criteria of wealth to help the poor and the needy. The term is derived from the root letters ز ك و which also carry meanings of purity, purification and piety. Check out this infographic about Zakah!

It is in the Quran to refer to what Allah has made lawful for Muslims, as opposed to what He has made unlawful. Commonly known examples are foods and beverages. As a side note, it is important to remember that not everything is categorized as Halaal (permissible, allowed) versus Haraam (illegal, forbidden) - the reality is much more subtle. In Islamic jurisprudence, we refer the a classification known as "the five decisions":

This might relate to anything precious to which individuals who are not in a condition of purity are not allowed access, or to an evil hence, a sinful activity that is unlawful.

Hajj refers to the pilgrimage to the Ka'bah (the House of Allah SWT) and other highly symbolic sites in Mecca, Saudi Arabia, and is held every year in the Hijri month of Dhul Hijjah. It is a religious responsibility that Muslims must perform at least once in their lifetime, if they have the financial and physical means to do so. Learn more about Hajj here!

Umrah is the minor Islamic pilgrimage to Mecca. It can be performed at any time of year, as opposed to Hajj, which takes place on specified dates prescribed by Allah SWT, following the Islamic calendar. It was narrated from Ibn 'Abbas that the Messenger of Allah (ﷺ) said: "Umrah during Ramadan is equivalent to Hajj." (Sunan Ibn Majah 2994)