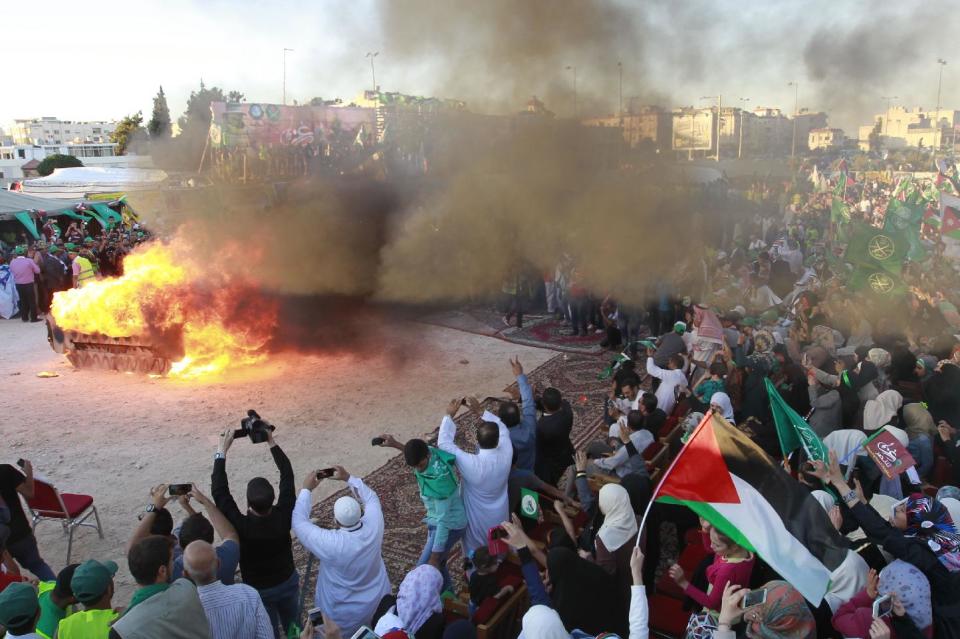 ​
Amman (AFP) - Tens of thousands of Jordanians celebrated on Friday the "Gaza victory" in the war against Israel, at a rally organised by the Islamist opposition.

Muslim Brotherhood chief Hammam Said said that around half a million people attended the rally in Tabarbur, east of the Jordanian capital, while a security official put the number at more than 100,000.

Demonstrators waved Palestinian and Jordanian flags as well as the colours of Hamas, the Islamist Palestinian rulers of Hamas, who have been locked in a month-long deadly showdown with Israel


They also held up signs that read: "Gaza victory" and "There is no option but the resistance" in reference to Hamas's confrontation with Israeli forces, and urged Arab rulers to "liberate Palestine".

The demonstrators also chanted slogans of support for Hamas's military wing, the Ezzeddine al-Qassam Brigades, with the Brotherhood chief lauding the fighters, an AFP correspondent said.

"O heroes of Qassam... may God praise you," said Said, paying tribute to the militants for firing rockets at Israel and its troops.

During the rally masked men wearing military fatigues like those of the Qassam Brigades marched holding up mock rockets.

Israel launched Operation Protective Edge on July 8 to stop rocket attacks on its territory and nine days later expanded it to destroy a network of tunnels used by militants to infiltrate the Jewish state.

More than 1,800 Palestinians have been killed in the Israeli offensive while 67 people, mostly soldiers died on the Israeli side.

Israel and the Palestinians observed a 72-hour ceasefire from Tuesday but hostilities resumed again after it expired at 0500 Friday.

Palestinian militants breached the quiet by firing rockets into Israel and Israeli warplanes retaliated by pounding targets across Gaza.

Egypt is mediating between Israelis and Palestinians and insists negotiations were making progress but Israel has recalled its delegation and warned it would not negotiate under fire.

Hundreds of people also marched to the Jordanian prime minister's office on Friday in a demonstration organised by leftist parties and trade unions to denounce the Israeli offensive on Gaza.


What is wrong with these people and what they are celebrating? Which victory are they celebrating?How many innocent people got killed, more than 1,800 Palestinians , how many more people will get killed, because countries as Jordan and other incompetent Muslim countries, are keeping themselves silent and doing nothing to lead Muslim people toward civil world and civil values, democracy and freedom.


May Allah guide us all. Amin.

When a 'ceasefire' ends and two sides in a confrontation such as in Gaza, when the Muslims fire rockets in Israel, it is 'terrorism' and nothing other than that. The Palestinians are hence effectively 'de-humanised' in this manner. Their deaths, their casualties, their fatalities are less important in comparison to Israelis.

If the Palestinian cause is betrayed by their opposition to the more acceptable side; in this instance Israel, the unconditional and permanent darling of the West, the Palestinians are deliberately marginalised to 'aggressor', 'breacher of peace agreements' and so on. Any defence of their people, their land is aggression, as long as it is by them and always wrong, even if causes minimal or less damage than Israel in comparison.

When Israel does the same thing, even when it is ten times higher in proportion, with heavier civilian casualties and fatalities and excessive damage to the infrastructure, the state apparatus, the water, electricity and energy supply, it is done in the name of preserving peace, so as to protect its population and for defending its national identity and borders, and for nothing other than good.
You must log in or register to reply here.
Share:
Facebook Twitter Reddit Pinterest Tumblr WhatsApp Email Share Link
Top